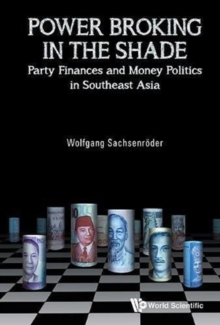 'The book offers a broad survey of political partiesaEURO (TM) financing strategies in Southeast Asia.'Contemporary Southeast AsiaPolitical activities, the running of party organisations, branches and headquarters, and especially election campaigns, are becoming increasingly costly, and no party can survive without money.

Political parties have become more and more like businesses, including the temptation to maximise the income and the war chests, thus opening the doors for vested interests and influence peddling.

As a result, money politics is pervasive, and the public is becoming increasingly critical of it.

In most countries in the region general and political corruption, graft, and influence peddling are all too visible for the voters, while good governance remains an ideal too often out of reach.This book, Power Broking in the Shade: Party Finances and Money Politics in Southeast Asia, provides an overview of the strategies for financial survival of the parties in the region and the importance of stable cash flows for their political success.

The book fills the void of a comparative approach towards party financing that covers the whole of ASEAN and offers accessible facts and understandable analysis for anyone interested in the politics of Southeast Asia.