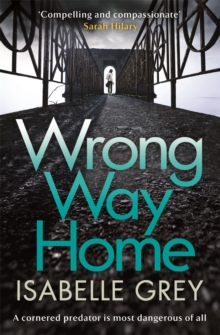 Wrong Way Home : the compelling, suspense-packed crime thriller you won't be able to put down Hardback

'Sympathetic and suspense-packed' Sunday Times'A classy, satisfying read, superbly put together' Mari HannahA cold case leads DI Grace Fisher on the hunt for the most dangerous killer of her career - but after twenty-five years, can she really be sure she will get to the truth?The same night a local hero saved two people from the burning Marineland resort in Southend, a young woman was raped and murdered minutes from the scene of the fire, the culmination of a series of brutal rapes in the town.

DI Grace Fisher relishes the prospect of finally catching the culprit, but when the evidence doesn't point to one clear suspect, she must reconstruct the original investigation.

Any suggestion that the Essex force was less than thorough at the time could alienate her colleagues and destroy her chances of reaching the truth. Grace finds her investigation shadowed by a young true-crime podcaster backed by veteran crime reporter Ivo Sweatman.

As pressure mounts she cannot afford to be distracted.

She knows that a cold-blooded killer is slowly being backed into a corner, and a cornered predator is often the most dangerous of all...