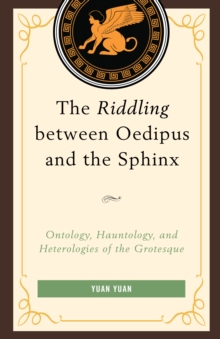 The Riddling between Oedipus and the Sphinx : Ontology, Hauntology, and Heterologies of the Grotesque Hardback

The issue of the other has always been an urgent one, especially since 1980's, when the political debates over race, gender, class, culture, ethnicity, and post-colonialism took the central stage. The Riddling between Oedipus and the Sphinx, Ontology, Hauntology, and Heterologies of the Grotesque probes the polemic status of the other and the dubious nature of the subject from a heterodox perspective of an emblematic grotesque figure, the Sphinx-the mystical trickster and the guardian of sacred knowledge in Egyptian culture.

In Greek mythology, Oedipus, the epitome of Western logos, solved the Sphinx's riddle with a single word, "Man." This evocation for the phantom of a solipsistic subject discloses, in effect, Oedipus' latent grotesque disparity.

The book explores the encounter of this unlikely pair to inquire the riddling relationship between the singular subject and the grotesque other in the context of modern discourses of the subject and postmodern theories of the other.