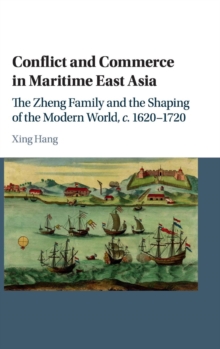 Conflict and Commerce in Maritime East Asia : The Zheng Family and the Shaping of the Modern World, c.1620-1720 Hardback

The Zheng family of merchants and militarists emerged from the tumultuous seventeenth century amid a severe economic depression, a harrowing dynastic transition from the ethnic Chinese Ming to the Manchu Qing, and the first wave of European expansion into East Asia.

Under four generations of leaders over six decades, the Zheng had come to dominate trade across the China Seas.

Their average annual earnings matched, and at times exceeded, those of their fiercest rivals: the Dutch East India Company.

Although nominally loyal to the Ming in its doomed struggle against the Manchus, the Zheng eventually forged an autonomous territorial state based on Taiwan with the potential to encompass the family's entire economic sphere of influence.

Through the story of the Zheng, Xing Hang provides a fresh perspective on the economic divergence of early modern China from western Europe, its twenty-first-century resurgence, and the meaning of a Chinese identity outside China.