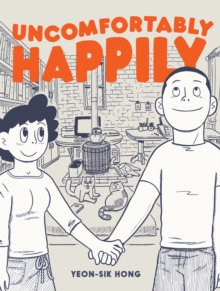 Inspired by Yeon-sik Hong s attempt to Uncomfortably, Happily is the story of a young couple finding their way.

Burdened by unmet comics deadlines and high rent, our narrator and his wife know they must make a change. Convinced the absence of traffic noise will ease his writer s block, our pair welcomes the idea of building a life from scratch. Deciding on a home atop an uninhabited mountain, they excitedly embrace the charms of their new rural existence.

From tending to the land and attempting grocery runs through snow, to the complexities of fighting depression in seclusion, the move does not immediately prove to be the golden ticket they d hoped for, and the silence of the mountain poses as much of an obstacle to output as the sirens of the city. Through it all, though, we see simple pleasures seep in and gain prominence over these commercial, and, often, comparatively trivial worries: the smell of the forest, the calming weight of enveloping snow, and the gratification of a stripped down life making art begin to muffle other concerns. Originally published in Korean to great acclaim and winning the Manhwa Today award, Uncomfortably, Happily uniquely explores our narrator s inner world. Hong propels the comic with gorgeously detailed yet simple art, sharing the story of two lives unfolding slowly, sometimes uncomfortably, yet ultimately, happily.