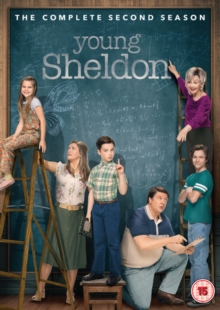 All 22 episodes from the second season of the comedy spin-off of 'The Big Bang Theory' starring Iain Armitage as a young Sheldon Cooper.

The show follows the child genius as he begins attending high school in East Texas but finds himself struggling to fit in with those around him.

The episodes are: 'A High-pitched Buzz and Training Wheels', 'A Rival Prodigy and Sir Isaac Neutron', 'A Crisis of Faith and Octopus Aliens', 'A Financial Secret and Fish Sauce', 'A Research Study and Czechoslovakian Wedding Pastries', 'Seven Deadly Sins and a Small Carl Sagan', 'Carbon Dating and a Stuffed Raccoon', 'An 8-bit Princess and a Flat Tire Genius', 'Family Dynamics and a Red Fiero', 'A Stunted Childhood and a Can of Fancy Mixed Nuts', 'A Race of Superhumans and a Letter to Alf', 'A Tummy Ache and a Whale of a Metaphor', 'A Nuclear Reactor and a Boy Called Lovey', 'David, Goliath and a Yoo-hoo from the Back', 'A Math Emergency and Perky Palms', 'A Loaf of Bread and a Grand Old Flag', 'Albert Einstein and the Story of Another Mary', 'A Perfect Score and a Bunsen Burner Marshmallow', 'A Political Campaign and a Candy Land Cheater', 'A Proposal and a Popsicle Stick Cross', 'A Broken Heart and a Crock Monster' and 'A Swedish Science Thing and the Equation for Toast'.