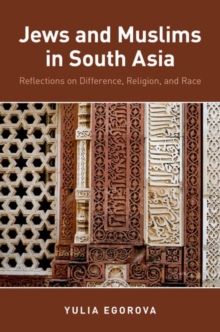 Jews and Muslims in South Asia examines how Jews and Muslims relate to each other in a place where, in contrast to Europe, their perceived attitudes towards one another do not often make headlines.

In the European imagination, Jews and Muslims have both been seen as the ultimate "other." At the same time, Western politics and media construct Jews and Muslims in opposition to each other and see their relationship as unavoidably polarized due to the conflictin the Middle East.

In this book, Yulia Egorova explores how South Asian Jews and Muslims relate to each other outside of a Western and Christian context, and reveals that despite some important differences this relationship is still intrinsically connected to global narratives about Jews and Muslims.

She alsoshows that the Hindu right have turned South Asian Jewish experiences into a rhetorical tool to deny the existence of discrimination against religious minorities, and that this ostensible celebration of Jewishness masks not only anti-Muslim, but also anti-Jewish prejudice.

She argues that South Asia inherited these notions of racial and religious difference from the British during the colonial period, which continue to cause stigmatization and oppression to this day.

Jews and Muslims inSouth Asia is a fascinating new contribution to the academic discussion on anti-Semitism, Islamophobia, and their overlapping histories.