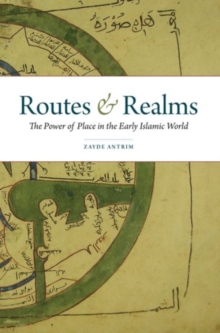 Routes and Realms : The Power of Place in the Early Islamic World Paperback / softback

Routes and Realms explores the ways in which Muslims expressed attachment to land from the ninth through the eleventh centuries, the earliest period of intensive written production in Arabic.

In this groundbreaking first book, Zayde Antrim develops a "discourse of place," a framework for approaching formal texts devoted to the representation of territory across genres.

By closely reading and analyzing these works, Antrim argues that their authors imagined plots of land primarily as homes, cities, and regions and associated them with a range of claims to religious and political authority.

She contends that these are evidence of the powerful ways in which the geographical imagination was tapped to declare loyalty and invoke belonging in the early Islamic world, reinforcing the importance of the earliest regional mapping tradition in the Islamic world.

Routes and Realms challenges a widespread tendency to underestimate the importance of territory and to over-emphasize the importance of religion and family to notions of community and belonging among Muslims and Arabs, both in the past and today.