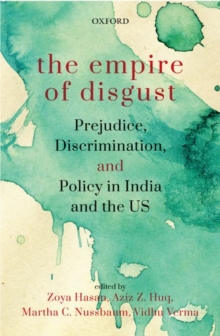 The Empire of Disgust : Prejudice, Discrimination, and Policy in India and the US Hardback

All known societies exclude and stigmatize one or more minority groups.

Frequently, these exclusions are underwritten with a rhetoric of disgust.

People of certain groups, it is alleged, are filthy, hyper-animal, or not fit to share such facilities as drinking water, food, and public swimming pools with the 'clean' and 'fully human' majority.

But exclusions vary in their scope and also in the specific disgust-ideologies underlying them.

In this volume,interdisciplinary scholars from India and the United States present a detailed comparative study of the varieties of prejudice and stigma that pervade contemporary social and political life.

These include prejudice along the axes of caste, race, gender identity, age, sexual orientation, disability, ethnicity,religion, and economic class.

In examining these forms of stigma and their intersections, the authors present theoretically pluralistic and empirically sensitive accounts that both explain group-based stigma and suggest ways forward.

These forward-looking remedies, including group resistance to subordination as well as institutional and legal change, point the way towards a public culture that is informed by our diverse histories of discrimination and therefore equipped to eliminate stigma inall of its multifaceted forms.