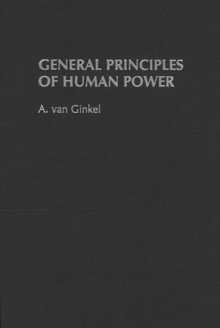 by A. van Ginkel

Though power is commonly seen as a special feature of exceptional personalities, van Ginkel argues that power is actually a given feature of all humans, animals, and plants.

Each has different power, of a special kind and a special degree.

All plant, animal, and human power is sparked and specified by a fusion of varieties of the same four general elements: Faculty, Object, Effect, and Limit.

Unlike animal power, human power rises and falls irregularly, both in history and in individual life.

The difference between the two is sometimes slight, sometimes dramatic.

In the near future all human power may be reduced to zero by such man-made perils as environment devastation, self-dementing addictions, or mass-destructive weapons, unless eductional and governmental power expand on an unprecedented scale.

Human power is unlimited as long as it expands within a philosophically or theologically defined limit.