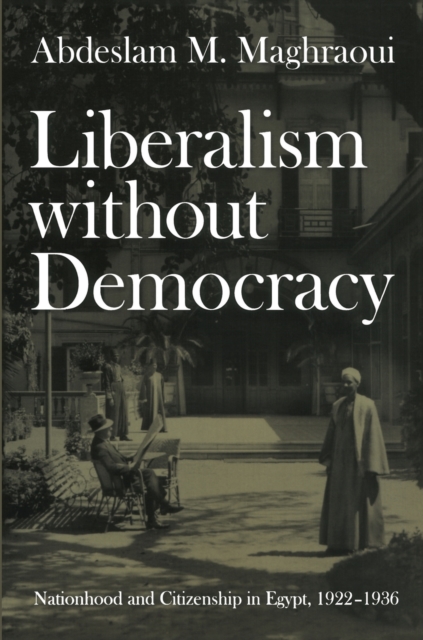 Liberalism without Democracy : Nationhood and Citizenship in Egypt, 1922-1936 Paperback / softback

Part of the Politics, History, and Culture series

The history of Western intervention in the Middle East stretches from the late eighteenth century to the present day.

All too often, the Western rationale for invading and occupying a country to liberate its people has produced new forms of domination that have hindered rather than encouraged the emergence of democratic politics.

Abdeslam M. Maghraoui advances the understanding of this problematic dynamic through an analysis of efforts to achieve liberal reform in Egypt following its independence from Great Britain in 1922.In the 1920s and 1930s, Egypt's reformers equated liberal notions of nationhood and citizenship with European civilization and culture.

As Maghraoui demonstrates, in their efforts to achieve liberalization, they sought to align Egypt with the West and to dissociate it from the Arab and Islamic worlds.

Egypt's professionals and leading cultural figures attempted to replace the fez with European-style hats; they discouraged literary critics from studying Arabic poetry, claiming it was alien to Egyptian culture.

Why did they feel compelled to degrade local cultures in order to accommodate liberal principles?Drawing on the thought of Lacan, Fanon, Said, and Bhabha, as well as contemporary political theory, Maghraoui points to liberalism's inherent contradiction: its simultaneous commitments to individual liberty and colonial conquest.

He argues that when Egypt's reformers embraced the language of liberalism as their own, they adopted social prejudices built into that language.

Efforts to achieve liberalization played out-and failed-within the realm of culture, not just within the political arena.

Opinions voiced through literary works, cartoons, newspaper articles on controversial social issues, and other forms of cultural expression were ultimately more important to the fate of liberalism in Egypt than were questions of formal political participation and representation.

Liberalism without Democracy demonstrates the powerful-and under appreciated-role of language and culture in defining citizenship and political community.