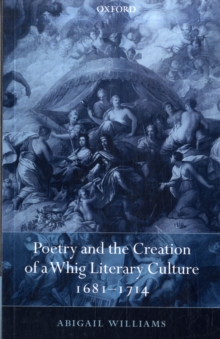 by Abigail (Fellow and Tutor in English at St Peter's College, University of Oxford.) Williams

Poetry and the Creation of Whig Literary Culture offers a new perspective on early eighteenth century poetry and literary culture, arguing that long-neglected Whig poets such as Joseph Addison, John Dennis, Thomas Tickell, and Richard Blackmore were more popular and successful in their own time than they have been since.

These and other Whig writers produced elevated poetry celebrating the political and military achievements of William III's Britain, andwere committed to an ambitious project to create a distinctively Whiggish English literary culture after the Revolution of 1688.

Far from being the penniless hacks and dunces satirized by John Dryden and the Scriblerians, they were supported by the patronage of the wealthy Whig aristocracy, and their workspromoted as a new English literature to rival that of classical Greece and Rome. 'Poetry and the Creation of Whig Literary Culture' maps for the first time the evolution of an alternative early eighteenth-century poetic tradition which is central to our understanding of the literary history of the period.