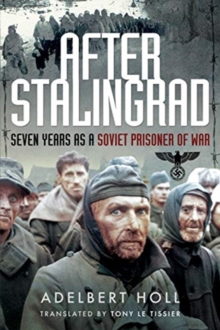 After Stalingrad : Seven Years as a Soviet Prisoner of War Paperback / softback

The battle for Stalingrad has been studied and recalled in exhaustive detail ever since the Red Army trapped the German 6th Army in the ruined city in 1942.

Graphic first-hand accounts of the fighting have been published by soldiers of all ranks on both sides, so we have today an extraordinarily precise picture of the grim experience of the struggle from the individual's viewpoint.

But most of these accounts finish at the end of the battle, with columns of tens of thousands of German soldiers disappearing into Soviet captivity.

Their fate is rarely described. That is why Adelbert Holl's harrowing and vivid memoir of his seven-year ordeal as a prisoner in the Soviet camps is such an important record as well as an absorbing story.