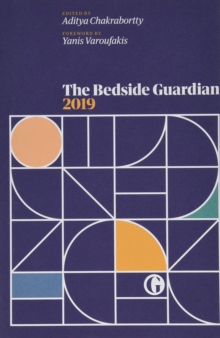 As thought-provoking, irreverent and intelligent as the paper itself, The Bedside Guardian is essential reading for anyone wanting an insight into the upheavals of 2019

Rarely has the UK endured such a turbulent year in peacetime. As the country lurched towards Brexit, the Maybot suffered her last malfunction, Boris Johnson blustered his way to power – and it became almost impossible to buy a Gregg’s vegan sausage roll.

In this anthology of the Guardian’s best journalism of the last twelve months, you can relive both juddering lows and soaring highs: from the rise of the far right to the schoolchildren who bunked class and took to the streets against climate change. Our writers take you on the Honduran caravan trying to cross the US border, behind the doors at Downing Street as ministers are hired and fired – and inside the gents at Lord’s as England win the cricket World Cup.

This is some of the best writing by the cream of today’s journalism: Marina Hyde, John Crace, Gary Younge and many more. As thought-provoking, irreverent and intelligent as the paper itself, The Bedside Guardian is essential reading for anyone wanting an insight into the upheavals of 2019.