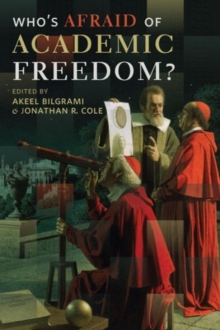 In these seventeen essays, distinguished senior scholars discuss the conceptual issues surrounding the idea of freedom of inquiry and scrutinize a variety of obstacles to such inquiry that they have encountered in their personal and professional experience.

Their discussion of threats to freedom traverses a wide disciplinary and institutional, political and economic range covering specific restrictions linked to speech codes, the interests of donors, institutional review board licensing, political pressure groups, and government policy, as well as phenomena of high generality, such as intellectual orthodoxy, in which coercion is barely visible and often self-imposed. As the editors say in their introduction: "No freedom can be taken for granted, even in the most well-functioning of formal democracies.

Exposing the tendencies that undermine freedom of inquiry and their hidden sources and widespread implications is in itself an exercise in and for democracy."