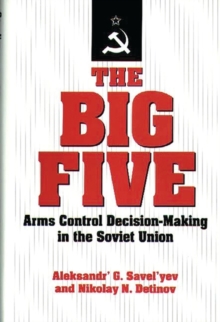 Based primarily on the authors' personal experiences, this is the first study to reveal the inside story of how arms control decisions were made in the former Soviet Union.

Savel'yev and General-Lieutenant Detinov participated directly in the decision-making process from 1969, when the Big Five was established, to the end of 1991, when the USSR was dissolved.

They pay special attention to activities of the Politburo Commission for the Supervision of the Negotiations-the Big Five-and its working body, the interagency group known as the Five.

They describe the key moments and main changes in the Soviet positions at SALT-I, SALT-II, INF, START, and DST.