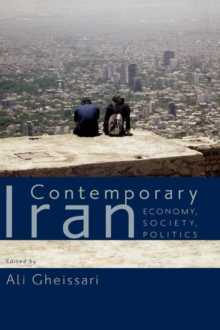 by Ali (Professor of History and Adjunct, Senior Associate Member and Visiting Fellow of St. Gheissari

Iran's geographical location, its oil, its nuclear program, its volatile political landscape, its espousal of militant Islam, all combine to make it a key player in some of the most crucial issues of our time.

But because of its relative isolation, there is a shortage of hard information about today's Iran.

In this volume, an imposing roster of both internationally renowned Iranian scholars and rising young Iranian academics offer essays - many based on recentfieldwork - on the nature and evolution of Iran's economy, significant aspects of Iran's changing society, and the dynamics of its domestic and international politics since the 1979 revolution, focusing particularly on the post-Khomeini period.

The book will be of great interest not only to Iranspecialists, but also to scholars of comparative politics, democratization, social change, politics in the Muslims world, and Middle Eastern studies.