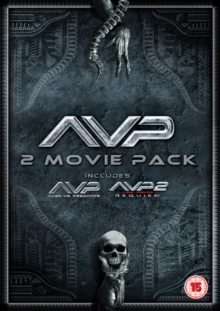 In 'Alien vs Predator' (2004), a team of archaeologists are sent to Antarctica when an unidentified heat source turns out to be a pyramid-like temple buried deep under the ice.

Discovering an alien life-form present in the temple, events take a turn for the worse when a group of adolescent predators arrive, intent on collecting the skulls of the aliens, and any passing humans, as trophies.

In 'Aliens vs Predator - Requiem' (2007), returning to their home planet with several alien captives and a dead comrade on board, two predator pilots are killed when an alien hybrid, unknowingly concealed in the body of their dead buddy, bursts forth.

Before he dies however, the pilot manages to send off a distress signal to his home planet, where a predator receives it before heading off to Earth in response.

The spacecraft meanwhile, has crashlanded in the woods of Colorado, spilling its deadly cargo, which immediately sets about culling the local population with extreme professionalism.

It's not long before the predator arrives, unleashing another almighty killing spree, as he tries to stop the hybrid reproducing in quantities that will soon overrun the county.