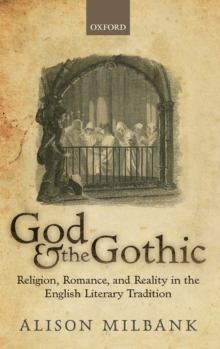 God and the Gothic: Romance and Reality in the English Literary Tradition provides a complete reimagining of the Gothic literary canon to examine its engagement with theological ideas, tracing its origins to the apocalyptic critique of the Reformation female martyrs, and to the Dissolution of the monasteries, now seen as usurping authorities.

A double gesture of repudiation and regret is evident in the consequent search for political, aesthetic, andreligious mediation, which characterizes the aftermath of the Glorious Revolution and Whig Providential discourse.

Part one interprets eighteenth-century Gothic novels in terms of this Whig debate about the true heir, culminating in Ann Radcliffe's melancholic theology which uses distance and loss to enable a newmediation.

Part two traces the origins of the doppelganger in Calvinist anthropology and establishes that its employment by a range of Scottish writers offers a productive mode of subjectivity, necessary in a culture equally concerned with historical continuity.

In part three, Irish Gothic is shown to be seeking ways to mediate between Catholic and Protestant identities through models of sacrifice and ecumenism, while in part four nineteenth-century Gothic is read as increasinglytheological, responding to materialism by a project of re-enchantment.

Ghost story writers assert the metaphysical priority of the supernatural to establish the material world.

Arthur Machen and other Order of the Golden Dawn members explore the double and other Gothic tropes as modes of mystical ascent, whileraising the physical to the spiritual through magical control, and the M.