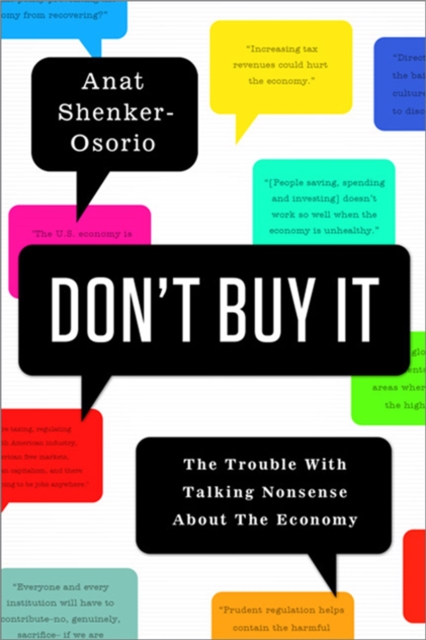 Don't Buy It : The Trouble with Talking Nonsense about the Economy Hardback

After everything that's happened, how is it possible that conservatives still win debates about the economy?

Time and again the right wins over voters by claiming that their solutions are only common sense, even as their tired policies of budgetary sacrifice and corporate plunder both create and prolong economic disaster.

Why does the electorate keep buying what they're selling?

According to political communications expert Anat Shenker-Osorio, it's all about language,and not just theirs, but ours.In Don't Buy It Shenker-Osorio diagnoses our economic discourse as stricken with faulty messages, deceptive personification, and, worst of all, a barely coherent concept of what the economy actually is.

Opening up the business section of most newspapers or flipping on cable news unleashes an onslaught of economic doomsaying that treats the economy as an ungovernable force of nature.

Alternately, by calling the economy unhealthy" or recovering" as we so often do, we unconsciously give it the status of a living being.

No wonder Americans become willing to submit to any indignity required to keep the economy happy.

Tread lightly, we can't risk irritating the economy!Cutting through conservative myth-making, messaging muddles, and destructive misinformation, Shenker-Osorio suggests a new way to win the most important arguments of our day.

The left doesn't have to self-destruct every time matters economic come to the fore,there are metaphors and frames that can win, and Shenker-Osorio shows what they are and how to use them.

Don't Buy It is a vital handbook for seizing victory in the economic debate.

In the end, it convincingly shows that radically altering our politics and policies for the better is a matter of first changing the conversation,literally.