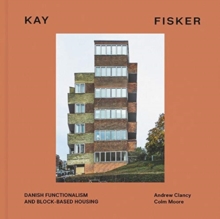 This book is the first on the architecture of Kay Fisker (1893-1965), a leading exponent of DanishFunctionalism.

Hebuilt many large scale housing schemes, mostly for non-profit workers' housingassociations, and developed innovative and beautifully considered high-density,low-rise block schemes, which have proven useful and influential to the growingnumber of contemporary architects who have examined his designs.

The architectsexplain their projects and how these have been influenced by Fisker.