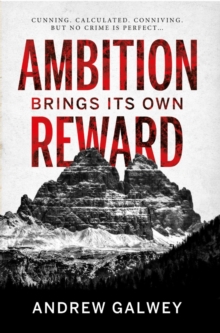 Initiating a career is a critical time for any ambitious young person, and especially so for Bill Green who arrives at (the fictional) Linkirk University full of enthusiasm to start his first job.

Determined to prove himself, he diligently invests much time and effort in fulfilling the many varied duties assigned to him, suggesting forming a Centre of Excellence in Environmental Science of which he hopes to be appointed its first Director.

When the Professors appoint Walter Thompson instead, Bill is left devastated and infuriated.

Already on hostile terms with Walter, one year his senior, his suffering intensifies on coming to believe that his girlfriend, Beth, has transferred her affections to Walter. With increasing anguish, Bill decides that, to achieve his ambition to be a successful academic, he must eliminate Walter. Calculation, cunning and concealment contribute to Bill's planned 'perfect crime', by making it appear that Walter's demise has resulted from an unfortunate, fatal accident during fieldwork alone in a remote Italian mountain valley. But no crime is perfect as Bill soon learns as the case he's sewn up for the police begins to unravel...