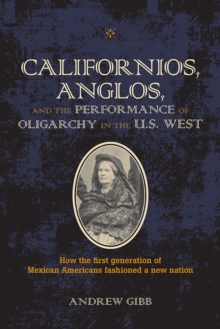 Californios, Anglos, and the Performance of Oligarchy in the U.S. West Paperback / softback

In Californios, Anglos, and the Performance of Oligarchy in the U.S.

West, author Andrew Gibb argues that the mid-nineteenth-century encounter between Anglos and californios- the Spanish-speaking elites who ruled Mexican California between 1821 and 1848-resulted not only in the Americanization of California but also the "Mexicanization" of Americans.

Employing performance studies methodologies in his analysis of everyday and historical events, Gibb traces how oligarchy evolved and developed in the region. The oligarchic rule of the californios has significantly shaped the social and political development of the greater U.S.

West from the nineteenth century to the present day.

Traces of that power are still visible in the places where California's elites continue to gather-from the meeting rooms of the California Club in downtown Los Angeles and the Pacific-Union at the top of San Francisco's Nob Hill, to the dining rooms and parlors of Pasadena mansions and Hillsborough estates.

Gibb outlines regional patterns of oligarchic rule that reveal the continuous functioning of an autocratic power structure that traces its roots to Mexican California.

While the power of local oligarchs has waned in the years since the Second World War, the significant influence they still wield is a reminder of an era when exceptionally concentrated land ownership ensured elite control of California society. This interdisciplinary study draws on performance studies, theatre historiography, and New Western History to identify how the unique power relations of historical California were constituted and perpetuated through public performances- not only traditional theatrical productions, but also social events such as elite weddings and community dances-and historical events-the U.S. seizure of the city of Monterey, the feting of Commodore Stockton in San Francisco, and the Bear Flag Revolt.