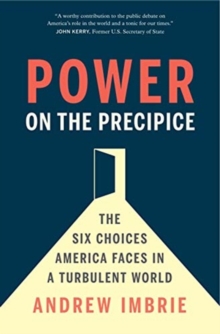 Power on the Precipice : The Six Choices America Faces in a Turbulent World Hardback

How to renew American leadership in a turbulent, polarized, and postdominant world "A worthy contribution to the public debate on America's role in the world and a tonic for our times."-John Kerry, Former U.S.

Secretary of State"Imbrie mounts a well-informed examination of the country's ills and offers a discerning perspective on its future paths . . . A thoughtful consideration of myriad challenges facing the U.S." -Kirkus Reviews Is America fated to decline as a great power?

Can it recover? With absorbing insight and fresh perspective, foreign policy expert Andrew Imbrie provides a road map for bolstering American leadership in an era of turbulence abroad and deepening polarization at home.

This is a book about choices: the tough policy trade-offs that political leaders need to make to reinvigorate American money, might, and clout.

In the conventional telling, the United States is either destined for continued dominance or doomed to irreversible decline.

Imbrie argues instead that the United States must adapt to changing global dynamics and compete more wisely.

Drawing on the author's own experience as an adviser to Secretary of State John Kerry, as well as on interviews and comparative studies of the rise and fall of nations, this book offers a sharp look at American statecraft and the United States' place in the world today.