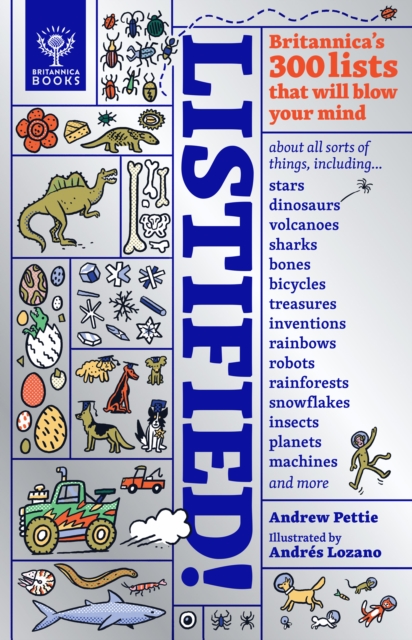 Listified! : Britannica's 300 lists that will blow your mind Hardback

'A treasure trove of fun and fantastic facts!' Michael Morpurgo Enter the listiverse and get ready to see the world in a whole new way.

Britannica's Listified! takes the best and most amazing parts of the universe - erupting volcanoes, medieval machines, jumping spiders, exploding stars and everything in between - and organises them into quirky lists for curious kids and their friends and family to enjoy. Brought to life by Andres Lozano's imaginative and hilarious artworks, each list presents subjects from new and unexpected angles.

Ever wondered which 10 dinosaurs were the largest, and what they weighed... in cats? Or how much of your DNA you share with other animals... and bananas? Let Britannica's Listified! take you on a journey with Britannica's 300 lists that will blow your mind about everything from the human body, to prehistoric creatures, planet Earth, outer space and the mysteries beyond.