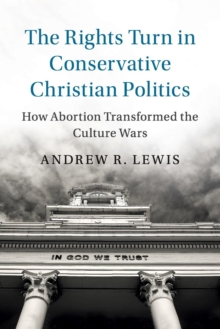 Part of the Cambridge Studies in Social Theory, Religion and Politics series

The Rights Turn in Conservative Christian Politics documents a recent, fundamental change in American politics with the waning of Christian America.

Lewis documents this change on the right, focusing primarily on evangelical politics.

Using extensive historical and survey data that compares evangelical advocacy and evangelical public opinion, Lewis explains how the prototypical culture war issue - abortion - motivated the conservative rights turn over the past half century, serving as a springboard for rights learning and increased conservative advocacy in other arenas.

Challenging the way we think about the culture wars, Lewis documents how rights claims are used to thwart liberal rights claims, as well as to provide protection for evangelicals, whose cultural positions are increasingly in the minority; they have also allowed evangelical elites to justify controversial advocacy positions to their base and to engage more easily in broad rights claiming in new or expanded political arenas, from health care to capital punishment.