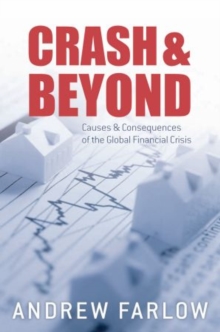 Crash and Beyond : Causes and Consequences of the Global Financial Crisis Hardback

In 2007-2008 the world was plunged into a financial and economic crash.

This book explores the multiple entwined roots of the crash, including the build-up of global economic imbalances, the explosion in the use of novel financial instruments, the mismanagement of risk, and the specific roles played by housing and debt.

It reviews the evidence that on the eve of the crash all was not well and that many political and finance industry leaders ignored the dangers. The book details the key events of the crash, and explains the main amplification mechanisms.

Instead of a blow-by-blow account of the numerous bank rescue programs, it uses an economics lens to dissect the logic of each category of rescue measure to make them more digestible for the lay reader.

It pays particular attention to the hidden ways in which rescue measures worked and their longer-term consequences, and investigates why some approaches were favoured over others, who will ultimatelybear the costs, what political constraints shaped outcomes, and to what degree new risks were created and problems only delayed. Half the book is devoted to the numerous policy struggles after the crash.

It evaluates fiscal and monetary policy measures used to rescue economies, efforts to tackle unemployment, proposals for dealing with collapsing housing markets, the widespread application of austerity and the battles over long-term sovereign debt.

A chapter is devoted to the handling of the Eurozone crash and policymakers struggles to fix it, and another to the continuing risks of global economic instabilities, some oldand some newly-created.

It reviews reforms of mortgage markets, monetary policy and banking designed to make such disasters less likely in the future.

Written before, during, and in the years immediately after the crash, the book is a lively chronicle and engaging analysis of the events andthinking of these years and of the economic and political constraints that shaped responses. The book's arguments take on added authority given that the author had identified, and called attention to, key features of the crash before it happened.

It is a very timely analysis of how policymakers arrived where they are now and of the many hurdles that still lie ahead.

It provides a scholarly yet highly accessible account that will appeal to a wide audience and contribute to the public debate about the lessons to be learnt and future policy options.