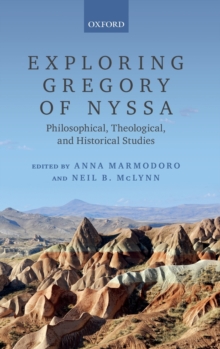 Exploring Gregory of Nyssa: Philosophical, Theological, and Historical Studies brings together an interdisciplinary team of historians, classicists, philosophers, and theologians to offer a holistic exploration of the thought of Gregory of Nyssa.

The volume considers Gregory's role in the main philosophical and religious controversies of his era, such as his ecclesiastical involvement in the Neo-Nicene apologetical movement. It looks at his complexrelationships-for example with his brother Basil of Caesarea and with Gregory of Nazianzus.

Contributors highlight Gregory's debt to Origen, but also the divergence between the two thinkers, and their relationships to Platonism.

The study paints a picture of Gregory as a ground-breaking philosopher-theologian.

It analyses the nature of the soul, and connection to theological issues such as resurrection; questions that are still of interest in the philosophy of religion today, such as divine impassibility and the nature of the Trinity; and returning to more immediately humane concerns, Gregory also has profound thoughts on topics such as vulnerability and self-direction.

The volume will be of primary interest toresearchers, lecturers, and postgraduate students in philosophy, classics, history, and theology, and can be recommended as secondary reading for undergraduates, especially those studying classics and theology.