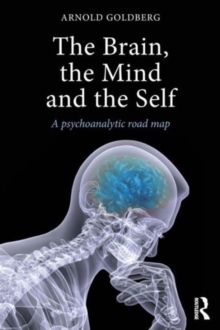 The Brain, the Mind and the Self : A psychoanalytic road map Paperback / softback

by Arnold (University of Illinois, Michael Reese Hospital, and the Institute for Psychoanalys Goldberg

Psychoanalysis enjoyed an enormous popularity at one time, but has recently fallen out of favor as new psychiatric medications have dominated the treatment of mental illness and a new interest in the brain and neuroscience begins to dominate the theory as to the cause and cure of mental illness. How do we distinguish between the brain, the mind and the self?

In his new book, Arnold Goldberg approaches this question from a psychoanalytic perspective, and examines how recent research findings can shed light on it.

He repositions psychoanalysis as an interpretive science that is a different activity to most other sciences that are considered empirical. Giving clear coverage of the various psychoanalytic models of the mind and the self, Goldberg examines how these theories fare against neuroscientific evidence, and what implications these have for psychoanalytic clinical practice.

The Brain, the Mind and the Self: A psychoanalytic road map sets up evidence-based, robust psychoanalytic theory and practice that will give psychoanalysts, social workers and practicing psychologists a valuable insight into the future of psychoanalysis. Arnold Goldberg, M.D. was born and raised in Chicago and trained at the University of Illinois, Michael Reese Hospital and the Institute for Psychoanalysis in Chicago.

He is recently retired from the Cynthia Oudejans Harris MD chair, and Professor of Psychiatry at Rush Medical Center.