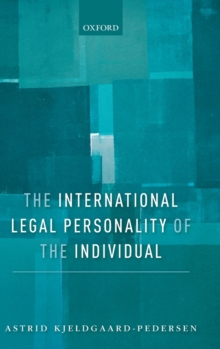 The International Legal Personality of the Individual Hardback

This is the first monograph to scrutinize the relationship between the concept of international legal personality as a theoretical construct and the position of the ultimate subject, the individual, as a matter of positive international law.

Contrary to conventional wisdom, international law did not apply to states alone until World War II, only to transform during the second half of the 20th century so as to include individuals as its subjects.

Rather, the answer to the question of individual rights and obligations under international law is - and always was - strictly empirical.

It follows, of course, that the entities governed by a particular norm tell us nothing about the legal system to which that norm belongs.

Against the background of these insights, the book shows how present-day international lawyers continue to allow an idea, which was never morethan a scholarly invention of the 19th century, to influence the interpretation and application of international law.

This state of affairs has significant real-world ramifications as international legal rights and obligations of individuals (and other non-state entities) are frequently applied more restrictively than interpretation without presumptions regarding 'personality' would merit.