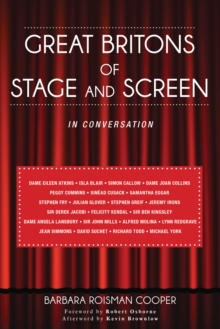 Great Britons of Stage and Screen : In Conversation Hardback

Although there are encyclopedias and biographical dictionaries of contemporary British film and theatre actors, most lack the intimacy of face-to-face interviews.

Great Britons of Stage and Screen: In Conversation features interviews with some of the leading actors of the last fifty years and more.

In this collection, Barbara Roisman Cooper presents interviews she personally conducted with more than twenty stars of film, television, and theatre.

Held in intimate surroundings-including the actors' private homes and theatre dressing rooms between performances-these interviews provide readers with a rounded understanding of the creative process and the dedication required to develop a performance.

Including many well-known Oscar, Tony, Olivier, and BAFTA winners, each interview is preceded by a short introduction and followed by the performer's most significant credits, both on the stage and screen.