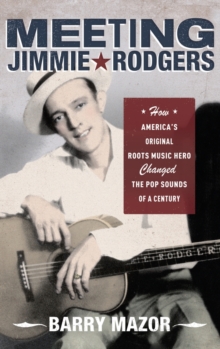 How did this Mississippi-born vaudevillian, a former railroad worker who performed so briefly so long ago, produce tones, tunes, and themes that have had such broad influenceand made him the model for the way American roots music stars could become popular heroes?

In Meeting Jimmie Rodgers, the first book to explore the deep legacy of "The Singing Brakeman" from a twenty-first century perspective, Barry Mazor offers a lively look at Rodgers' career, tracing his rise from working-class obscurity to the pinnacle of renown that came with such hits as "Blue Yodel" and "In the Jailhouse Now." As Mazor shows, Rodgers brought emotional clarity and a unique sense of narrative drama to every song he performed, whether tough or sentimental, comic or sad. His wistful singing, falsetto yodels, bold flat-picking guitar style, and sometimes censorable themes--sex, crime, and other edgy topics-set him apart from most of his contemporaries.

But more than anything else, Mazor suggests, it was Rodgers' shape-shifting ability to assume many public personas-workingstiff, decked-out cowboy, suave ladies' man-that connected him to such a broad public and set the stage for the stars who followed him. Mazor goes beyond Rodgers's own life to map the varied places his music has gone, forever changing not just country music but also rock and roll, blues, jazz, bluegrass, Western, commercial folk, and much more.

In reconstructing this far-flung legacy, Mazor enables readers to meet Rodgers and his music anew-not as an historical figure, but as a vibrant, immediate force.