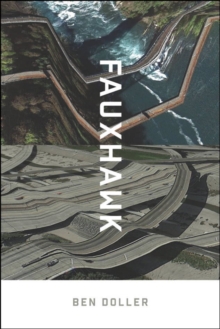 A politico-linguistic problem, a conflicted hairstyle, and a conflict-bound drone, Fauxhawk works in the space where dissent becomes materialized, ironized, and commodified.

The citizens in these poems are fraught in their passivity, both ashamed of being and of being surveyed.

Occupied by the material forces conspiring against poetry, Fauxhawk takes on the economics of writing, university bureaucracies, and complicit injustice.

The poems in Doller's thrilling new collection attempt to find their own tone amid the blare via formal innovation, carving a space where presence is signified, in hopeful and clarifying resistance.

An online reader's companion is available at http://bendoller.site.wesleyan.edu.