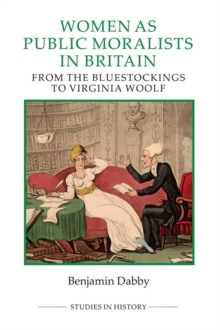 In nineteenth-century Britain, public debates about the nation's moral health and about men's and women's responsibility for it were shaped decisively by a tradition of female moralists.

This book looks at the cultural criticism of eight of the most significant of these writers: Anna Jameson, Hannah Lawrance, Margaret Oliphant, Marian Evans ("George Eliot"), Eliza Lynn Linton, Beatrice Hastings, Rebecca West and Virginia Woolf, providing a detailed and compelling account of how their writing on history, literature and visual art changed contemporaries' understanding of the lessons to be drawn from each field at the same time as they contested and redefined contemporary understandings of masculinity and femininity.

It recovers these moralists' understanding of themselves as part of a tradition of women of letters stretching from eighteenth-century bluestockings to their own time, and the growing consensus across the political range of periodicals that women's intellectual potential was equal to men's, and not determined by their sex. Benjamin Dabby is an independent historian.