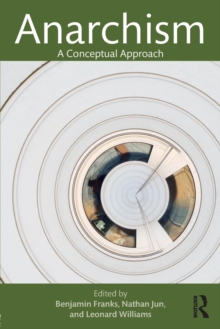 Anarchism is by far the least broadly understood ideology and the least studied academically.

Though highly influential, both historically and in terms of recent social movements, anarchism is regularly dismissed.

Anarchism: A Conceptual Approach is a welcome addition to this growing field, which is widely debated but poorly understood. Occupying a distinctive position in the study of anarchist ideology, this volume - authored by a handpicked group of established and rising scholars - investigates how anarchists often seek to sharpen their message and struggle to determine what ideas and actions are central to their identity.

Moving beyond defining anarchism as simply an ideology or political theory, this book examines the meanings of its key concepts, which have been divided into three categories: Core, Adjacent, and Peripheral concepts.

Each chapter focuses on one important concept, shows how anarchists have understood the concept, and highlights its relationships to other concepts. Although anarchism is often thought of as a political topic, the interdisciplinary nature of Anarchism: A Conceptual Approach makes it of interest to students and scholars across the social sciences, liberal arts, and the humanities.