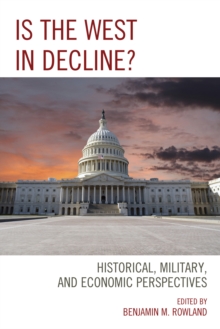 Is the West in Decline? : Historical, Military, and Economic Perspectives Hardback

Is the West in Decline? is a collection of ten essays by prominent scholars of international relations and current history, many of them associated with the European Studies program of the Johns Hopkins School of Advanced International Studies.

The essays explore the question of decline from several perspectives: theoretical, historical, counterfactual, and contemporary.

Thomas Row's essay uses alternative history to show how an unfallen Habsburg Empire might have evolved into a state system resembling the European Union.

Benjamin Rowland's essay on Oswald Spengler considers how the German historian's theory of decline could be applied to the West today.

Several of the essays are country studies. Not all conclude that countries or state systems are in decline, or that the condition, if present, is irreversible.

Writing about Germany, Stephen Szabo notes that only fifteen years ago, this currently robust country could have been seen as a clear exemplar of decline.

Dana Allin's essay on the U.S. asks whether a course change, including retrenchment and overseas rebalancing, might reverse decline or eliminate it altogether.

David Calleo's essay, among other things, looks at America's reserve currency status as a principal sustainer of American exceptionalism, and asks what might happen should the U.S. lose its "exorbitant privilege" as reserve currency provider to the international system.