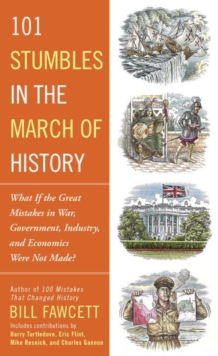 101 Stumbles In The March Of History : What if the Great Mistakes in War, Government, Industry, and Economics Were Not Made? Paperback / softback

An all-new compendium of 101 historic screw-ups from the author of 100 Mistakes that Changed History. DID I DO THAT When asked to name a successor, Alexander the Great declared that his empire should go -to the strongest-. . . but would rival factions have descended into war if he'd been a little more specific? What if the Vienna Academy of Art took a chance on a hopeful young student named Adolf Hitler? If Pope Clement VII granted King Henry VIII an annulment, England would likely still be Catholic today--and so would America. Bill Fawcett, author of 100 Mistakes That Changed History, offers a compendium of 101 all-new mammoth mistakes--from the ill-fated rule of Emperor Darius III to the equally ill-fated search for WMDs in Iraq--that will, unfortunately, never be forgotten by history.