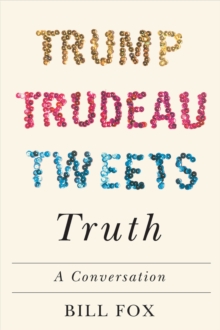 Media has long been considered a primary site for political discourse in Western liberal democracies, but now, with the advent of social media, giant multinational digital platforms such as Google, and online journalism, the way we do politics, talk politics, and cover politics has completely transformed. Trump, Trudeau, Tweets, Truth considers the ways that technology has led to an irreversible transition in power distribution, political journalism, and public discourse.

Discussing how the military-industrial complex of the 1950s gave way to today's celebrity-distribution complex, Bill Fox examines the amount of power accorded to people well-known for being well-known, from Donald Trump to Justin Trudeau.

Taking on a Canadian perspective, Fox addresses the disturbing cries of "fake" news in the post-truth age and demonstrates how journalism, no longer the domain of a select few political reporters and editors, has become decentralized and disaggregated. In a world that now plays out on mobile devices, Trump, Trudeau, Tweets, Truth seeks a path through the debris left behind by recent seismic shifts in political media and technology.