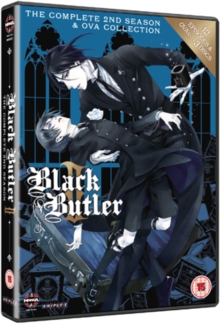 The complete second series, including OVA episodes, of the anime that follows the adventures of a demonic butler and his master.

This series focuses on a new butler and master. Alois Trancy (voice of Nana Mizuki) had a tough upbringing, kidnapped into slavery and torn away from everyone he knew.

Can his new butler, Claude Faustus (Takahiro Sakurai), use his special powers to compensate Alois for his past misfortune?