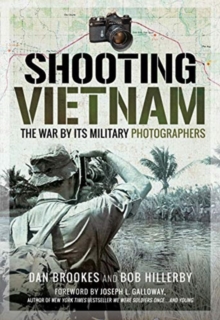 Shooting Vietnam : The War By Its Military Photographers Hardback

What was it like to be a military combat photographer in the most photographed war in history the Vietnam War? Shooting Vietnam takes you there as you read the firsthand accounts and view the hundreds of photographs by men who lived the war through the lens of a camera.

They documented everything from the horror of combat to the people and culture of a land they suddenly found themselves immersed in.

Some even juggled cameras with rifles and grenade launchers as they fought to survive while carrying out their assignments to record the war. Shooting Vietnam also finally brings recognition to these unheralded military combat photographers in Vietnam that documented the brutal, unpopular, and futile war. Firsthand accounts and photographs by military photographers in Vietnam from the mid-1960s to the early 1970s, Shooting Vietnam puts the reader right alongside these men as they struggle to document the war and stay alive while doing it although some didn't survive.

The cameras around their necks often shared space with a rifle or grenade launcher that enabled them to stay alive while performing their assigned military duties, killing, if necessary, to survive. Often, during a brief respite from trudging through swamps and rice paddies or jumping from a chopper into a hot landing zone, they would wander the streets of villages or even downtown Saigon, curiously photographing a people and a culture so strange and different to them.

It is these photographs, of a kinder, more personal nature, removed from the horror and death of war that they also share with the reader. The accounts in this book come from twelve men, all who had their own unique perspective on the war.

Some were seasoned photographers before the military, others had only recently held a camera for the first time.