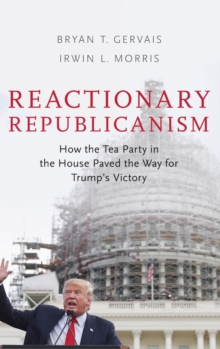 Reactionary Republicanism : How the Tea Party in the House Paved the Way for Trumps Victory Hardback

The shocking election of President Trump spawned myriad analyses and post-mortems, but they consistently underestimate the crucial role of the Tea Party on the GOP and Republican House members specifically.

In Reactionary Republicanism, Bryan T. Gervais and Irwin L. Morris develop the most sophisticated analysis to date for gauging the Tea Party's impact upon the U.S.

House of Representatives. They employ multiple types of data to illustrate themulti-dimensional impact of the Tea Party movement on members of Congress.

Contrary to conventional wisdom, they find that Republicans associated with the Tea Party movement were neither a small minority of the Republican conference nor intransigent backbenchers.

Most importantly, the invigoration of racial hostility andsocial conservatism among Tea Party supporters fostered the growth of reactionary Republicanism.

Tea Party legislators, in turn, endeavored to aggravate these feelings of resentment via digital home styles that incorporated uncivil and aversion-inducing rhetoric.

Trump fed off of this during his run, and his symbiotic relationship with Tea Party regulars has guided-and seems destined to-the trajectory of his administration.