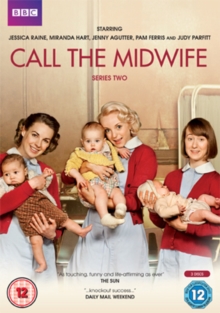 The complete second series of the BBC drama, adapted from Jennifer Worth's memoirs, about a group of midwives working in East London in the 1950s.

In this series, it's 1958, and while Jenny (Jessica Raine) has her hands full dealing with an abused patient, fellow midwives Trixie (Helen George) and Sister Evangelina (Pam Ferris) are forced to board a Swedish cargo ship to tend to the captain's pregnant daughter.