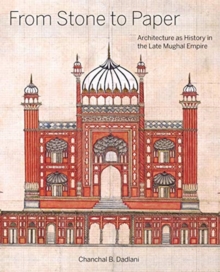 From Stone to Paper : Architecture as History in the Late Mughal Empire Hardback

by Chanchal B. Dadlani

By the 18th century, the Mughal Empire was well beyond its so-called golden age.

Its control of the Indian subcontinent was increasingly threatened by regional Indian states, as well as by the encroaching British Empire.

In response to a rapidly changing sociopolitical landscape, the Mughal emperors used architecture to harness their illustrious past and stage cultural authority for contemporary audiences.

It also explores representations of architectural monuments that circulated in the form of building plans, manuscript paintings, and postcards.

Ultimately, the book reveals how Mughal architects, artists, and patrons built on the cultural legacy of their imperial predecessors to create the very concept of a historical style identifiable as Mughal.