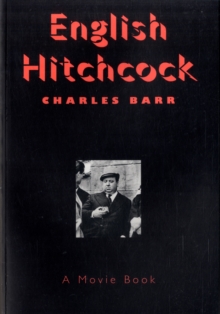 Alfred Hitchcock was one of the very few directors whose reputation often eclipsed that of his stars.

Although he achieved his greatest success and fame in Hollywood, he was quintessentially British and the 23 films that he made in Britain are very much more than apprentice work.

The Lodger, Blackmail, The Man Who Knew Too Much, The 39 Steps, and The Lady Vanishes are films of enormous wit and sophistication -- masterworks in their own right.

Hitchcock's critical reputation has so far been founded on his American films, an imbalance that English Hitchcock rectifies.

Its entertaining and elegantly written text, supported by 240 well-chosen stills and frame enlargements, offers a detailed and thoroughly documented reading of the films.

Charles Barr is Professor of Film Studies at the University of East Anglia, Norwich, England.

His Ealing Studios, now in its third edition, is widely acclaimed as the finest book ever written on British cinema.

His treatment of Hitchcock pays great attention to the films' writers and to the importance of Hitchcock's source material, previously ignored or written off by other critics.

The extensively annotated filmography offers more factual dated on the films than is elsewhere available.