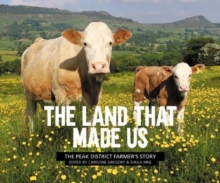 The Land That Made Us : The Peak District farmer's story Paperback / softback

The South West Peak is a lesser-known part of the Peak District stretching from Lyme Park in Cheshire in the north to Onecote in Staffordshire in the south, and from Macclesfield in the west to Buxton in the east.

The farmers of the South West Peak are the people who have made the landscape what it is today, and it is their personal accounts of working in this often challenging land that form the basis of The Land That Made Us.

Edited by local author Christine Gregory and dairy farmer Sheila Hine, and published in partnership with the Farming Life Centre and the Peak District National Park Authority with support from the National Lottery Heritage Fund, this book includes the testimony of over twenty farmers, and it is illustrated with photographs of them and their farming landscapes.

We hear stories from across the generations of heroic endeavour in difficult terrain, as well as accounts of day-to-day work and family life spanning eighty years of farming history.

The land had been farmed in traditional ways for centuries, but the Second World War changed that, and in succeeding years politics and increasing mechanisation have constantly rewritten the rule book for farmers.

There is pride in achievement as well as frustration at the often conflicting demands of food production and wildlife conservation. The Land That Made Us asks what makes for sustainability in the short and the long term.

The future of this landscape and of the farming communities that sustain it hangs in the balance, and it is the farmers' turn to reflect on their past and speculate about the future.