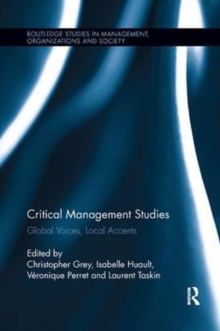 Part of the Routledge Studies in Management, Organizations and Society series

Critical Management Studies (CMS) is often dated from the publication of an edited volume bearing that name (Alvesson and Willmott, 1992).

In the two decades that have followed, CMS has been remarkably successful in establishing itself not just as a 'term' but as a recognizable tradition or approach.

The emerging status of CMS as an overall approach has been both encouraged and marked by a growing range of handbooks, readers and textbooks.

Yet the literature is dominated by writings from the UK and Scandinavia in particular, and the tendency is to treat this literature as constituting CMS.

However, the meaning, practice, constraints and context of CMS vary considerably between different countries, cultures and language communities.

This volume surveys fourteen various countries and regions where CMS has acquired some following and seeks to explore the different ways in which CMS is understood and the different contexts within which it operates, as well as its possible future development.