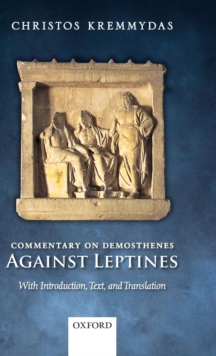 Commentary on Demosthenes Against Leptines : With Introduction, Text, and Translation Hardback

Against Leptines is one of the most important speeches delivered by Demosthenes.

In it he argues against the abolition of all honorific exemptions (ateleiai) from festival liturgies in Athens.

An important source for Athenian history in the mid-fourth century BC, the speech broaches a number of issues vital to our understanding of classical Athenian society, politics, and legislation.

The questions of public honours, Athenian democratic ideology,and the themes of expediency, justice and injustice, are central to the speech and have made it popular with audiences ever since the classical period. Kremmydas' volume is the first detailed commentary on this speech in any language since the 19th century. An extensive introduction, which covers key background issues, the addition of the Greek text (adapted from M.

R. Dilts's Oxford Classical Text of Demosthenes 20), and a facing English translation make the commentary even more accessible to a wider scholarly audience.

While the important historical and complex legal issues are given appropriate attention in the commentary section,a special emphasis is also given to the elucidation of Demosthenes rhetorical strategy and argumentation.