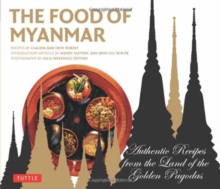 The Food of Myanmar : Authentic Recipes from the Land of the Golden Pagodas Paperback / softback

Myanmar, or Burma as it was previously known, is a land of golden pagodas, mighty rivers and generous deltas.

While the beauty of its countryside has long been famous, Myanmar's cuisine has been something of a secret up until now. Myanmar has over 130 ethnic groups and has been called a meeting point for peoples around Asia.

This diversity is reflected in the various types of foods that are eaten around the country.

This unique Burmese cookbook featuring over 60 recipes, collected from all over the country, reveals the treasures of Burmese cooking.

Discover a cuisine that is unique yet acknowledges the culinary traditions of its great neighbors: China and India.