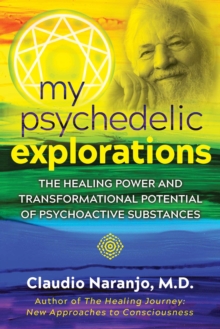 Claudio Naranjo's psychedelic autobiography with previously unpublished interviews and research papers * Explores Dr. Naranjo's pioneering work with MDMA, ayahuasca, cannabis, iboga, and psilocybin * Shares his personal accounts of psychedelic sessions and experimentation, including his work with Alexander "Sasha" Shulgin and Leo Zeff * Includes the author's reflections on the spiritual aspects of psychedelics and his recommended techniques for controlled induction of altered states In the time of the psychedelic pioneers, there were psychopharmacologists like Alexander "Sasha" Shulgin, psychonauts like Aldous Huxley, and psychiatrists like Humphrey Osmond.

Claudio Naranjo was all three at once. He was the first to study the psychotherapeutic applications of ayahuasca, the first to publish on the effects of ibogaine, and a long-time collaborator with Sasha Shulgin in the research behind Shulgin's famous books.

A Fulbright scholar and Guggenheim fellow, he worked with Leo Zeff on LSD-assisted therapy and Fritz Perls on Gestalt therapy.

He was a presenter at the 1967 University of California LSD Conference and, 47 years later, gave the inaugural speech at the First International Conference on Ayahuasca in 2014.

Across his career, Dr. Naranjo gathered more clinical experience in individual and group psychedelic treatment than any other psychotherapist to date.

In this book, his final work, Dr. Naranjo shares his psychedelic autobiography along with previously unpublished interviews, session accounts, and research papers on the therapeutic effects of psychedelics, including MDMA, ayahuasca, cannabis, iboga, and psilocybin.

The book includes Naranjo's reflections on the spiritual aspects of psychedelics and the healing transformations they bring, his philosophical explorations of how psychedelics act as agents of deeper consciousness, and his recommended techniques for controlled induction of altered states using different visionary substances.

Naranjo's work shows that psychedelics have the strongest potential for transforming and healing people over all therapeutic methods currently in use.