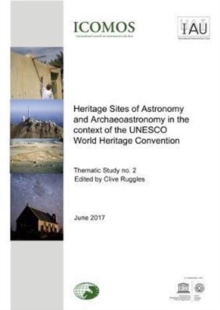 Heritage Sites of Astronomy and Archaeoastronomy in the Context of the UNESCO World Heritage Convention : Thematic Study no. 2 Electronic book text

This joint venture between ICOMOS, the advisory body to UNESCO on cultural sites, and the International Astronomical Union is the second volume in an ongoing exploration of themes and issues relating to astronomical heritage in particular and to science and technology heritage in general.

It examines a number of key questions relating to astronomical heritage sites and their potential recognition as World Heritage, attempting to identify what might constitute "outstanding universal value" in relation to astronomy. "Heritage Sites of Astronomy and Archaeoastronomy -- Thematic Study no. 2" represents the culmination of several years' work to address some of the most challenging issues raised in the first ICOMOS-IAU Thematic Study, published in 2010.

These include the recognition and preservation of the value of dark skies at both cultural and natural sites and landscapes; balancing archaeoastronomical considerations in the context of broader archaeological and cultural values; the potential for serial nominations; and management issues such as preserving the integrity of astronomical sightlines through the landscape. Its case studies are developed in greater depth than those in volume 1, and generally structured as segments of draft nomination dossiers.

They include seven-stone antas (prehistoric dolmens) in Portugal and Spain, the thirteen towers of Chankillo in Peru, the astronomical timing of irrigation in Oman, Pic du Midi de Bigorre Observatory in France, Baikonur Cosmodrome in Kazakhstan, and Aoraki-Mackenzie International Dark Sky Reserve in New Zealand.

A case study on Stonehenge, already a World Heritage Site, focuses on preserving the integrity of the solstitial sightlines. As for the first ICOMOS-IAU Thematic Study, a international team of authors including historians, astronomers and heritage professionals is led by Professor Clive Ruggles for the IAU and Professor Michel Cotte for ICOMOS.